The proliferation of televised horse racing these days makes it easier than ever to bet on the sport of kings.

For the newcomer, there is a wealth of horse racing betting terminology that you may encounter, so the below A-Z guide gives you some insight into the most common phrases that you might come across in media coverage, on betting websites or at the track itself. Once you get acquainted with these terminologies, head to our racing page for a list of available horse racing betting events.

Apprentice - Young jockey who is still learning his craft.

All-In Market - Type of betting market offered prior to the declaration of the Final Field whereby stakes are not returned in the event your selection does not gain a start. For instance, Unibet offers prices on the Melbourne Cup months in advance under ‘all-in’ conditions.

Black Book - A record of horses that have produced trials or performances of merit and that look worthy of following in upcoming races. 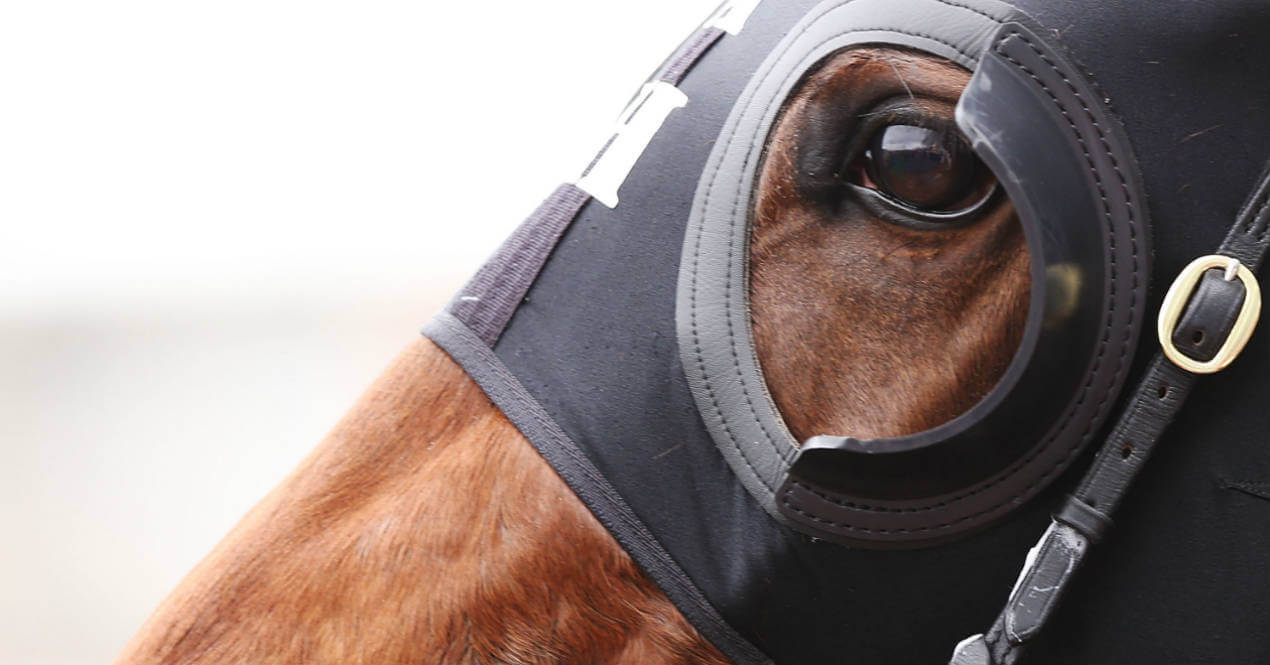 Blinkers - Piece of gear worn around a horse’s eyes with the intent of maintaining its focus during a race.

Blocked For A Run - Describes a horse that is unable to obtain clear running room in the straight.

Bookmaker - A person licensed to conduct betting on or off course.

Box/Boxed - Two or more runners to finish in any order in a multiple bet such as Quinella, Exacta, Trifecta.

Box Seat - The prime position for a runner during the race.

Box Trifecta - Is a type of bet where the punter selects three or more runners to fill the 1st, 2nd and 3rd places. The runners can finish in any order so long as they fill the first three places.

Checked - Interference received by a horse during a race that causes it to lose momentum.

Claim - An amount (in kgs) that an apprentice jockey may deduct from the weight a horse has been assigned to carry.

Colt - A male horse 3YO or under and has not been gelded.

Correct Weight - Once jockeys have weighed-in post-race to confirm that their horse carried the right amount, a ‘correct weight’ signal is raised to indicate that bets can now be paid out.

Connections - A horse’s owner(s) and trainer.

Dead Heat - Where two or more horses tie for a finishing position. Under our Dead Heat payout promotion, Unibet guarantees the full dividend payout on all Fixed Win bets and does not split the return.

Deductions - A percentage reduction applied to winning bets (either Win or Place) to account for the fact that horses have been scratched after the bet has been placed.

Derby - A stakes race for 3YOs.

Each Way - To have equal amount of money on the horse for a win a for a place.

Emergency - A runner that is on standby to take the place of any scratched horses in a race that is limited to a certain number of starters.

Exacta - Select the first two horses in a race in the finishing order.

Exotics - Collective name for bet types other than Win and Place. They involve correctly identifying more than one outcome, such as the correct finishing order of the first 2/3/4 placegetters (exacta/trifecta/First 4 respectively). 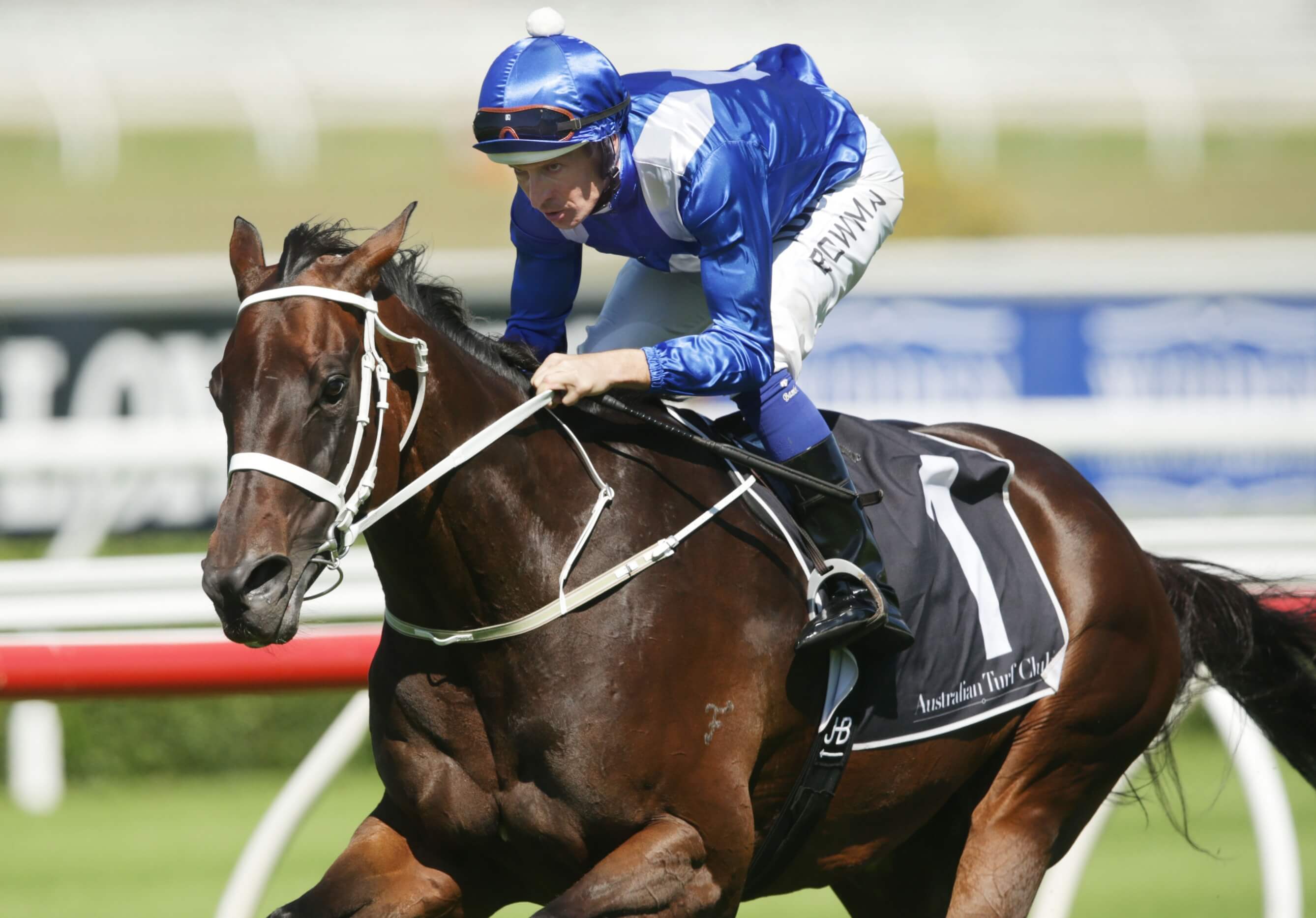 Favourite - The horse with the shortest odds.

Feature Race - The highest rated race on the card, determined by the category of the race and the prize money.

Field - The horses in the race.

Filly - A female horse 3YO or under.

First-Up - Describes a horse that is making its first run in a new preparation (period) of racing.

Flexi-Betting - Investing a smaller amount than the full dollar value of the bet and receiving a reduced percentage of the final dividend.

Fluctuation - Movement (either up or down) in a horse’s odds during betting. Unibet offers a ‘Top Fluctuation’ service on metropolitan racing in Australia which guarantees punters a payout of the highest official betting fluctuation.

Front Runner - A horse who usually leads the field for as far as he/she can.

Furlong - Distance of about 200 metres.

Gelding - A castrated male of any age.

Greet The Judge - Slang term for winning a race.

Get Out Stakes - Colloquial term for the last race on the card, which gives losing punters one last opportunity to recoup their losses and ‘get out’ of trouble.

Hands And Heels - Riding style that involves a jockey pushing with his hands and kicking with his heels rather than resorting to the whip.

Handicap - Common race class that involves each horse being assigned a particular weight based on past performances.

Head - The margin between runners. 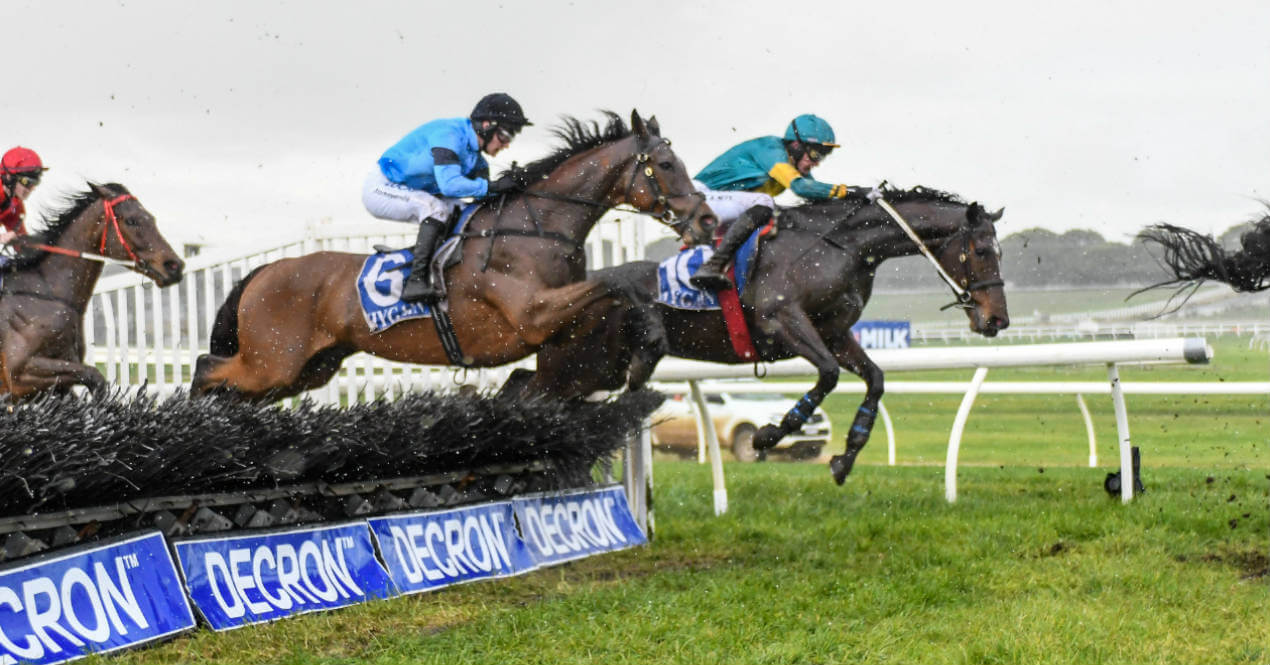 Hurdle - Race in which horses must jump over obstacles.

Jumped Out Of The Ground - Describes a horse that finished a race at a rapid rate to win. It can also be said that the horse ‘sprouted wings’ in this situation.

Knuckled - Describes a horse that stumbles and almost drops to its knees, typically as a result of an awkward departure from the starting barrier.

Knocked Up - Describes a horse that tires noticeably at the end of a race, often as a result of the jockey having to ride aggressively at the start to take up a forward position.

Late Scratching - A horse withdrawn from the race after a certain nominated time on raceday. This can happen right up until the barriers open.

Lay - A horse (typically the favourite) that is perceived to be poor value by a bookmaker and whose odds may be increased given the expectation that it won’t win.

Length - A horse’s length from nose to tail.

Long Shot - A runner being at long odds and is unlikely to win.

Maiden - A horse that hasn’t won a race. A maiden race is restricted to runners that satisfy this condition.

Mare - An adult female horse 4YO or older.

Mounting Yard - Enclosure where horses are paraded prior to the race and from where the jockey can climb aboard (mount) the horse.

Mudlark - Slang term for a horse that thrives in heavy (wet) conditions.

Moral - Slang term for a horse considered certain to win.

Neck - Margin between horses, about the length of a horse’s neck.

Odds On - Where the odds about a horse are less than Even Money (2.00). Also referred to as ‘tomato sauce odds’ or being ‘in the red’ given that bookmaker boards once displayed the price this colour.

On The Nose - Slang term for a Win bet.

Out The Gate - Where a horse’s odds (often the favourite) drift alarmingly prior to the race. Also known as getting ‘the blows’.

Photo Finish - Refers to a close result where a finish-line camera is used to determine the winner.

Place - This is when a horse finishes either 1st, 2nd or 3rd and you receive a dividend. There must be at least eight runners or more.

Plunge - Sudden and heavy support for a horse that causes its odds to reduce dramatically. These can either ‘come off’ (win) or ‘go astray’ (lose). A horse involved in a plunge is said to have been ‘backed off the map’.

Protest - Objection lodged regarding the outcome of a race. These can be either ‘upheld’ (whereby the final placings are amended) or ‘dismissed’. Under Unibet’s Protest Payout punters are paid out in full on Win bets in the event that their selection was first across the line but later relegated on protest.

Punter - A person placing a bet.

Quadrella - Select the winner of 4 pre-nominated races on the card.

Quinella - Select the first two horses in a race in any order.

Rails - Prime position in the bookies ring where the large bets are exchanged. Term also describes the fence-like structure that marks the boundary of the racetrack.

Roughie - A horse at big odds considered unlikely to win.

Scratched - Horse that was entered to run in a race will not be running in that race.

Second Up - Next run after a first up run, following spell of 90 days or more. 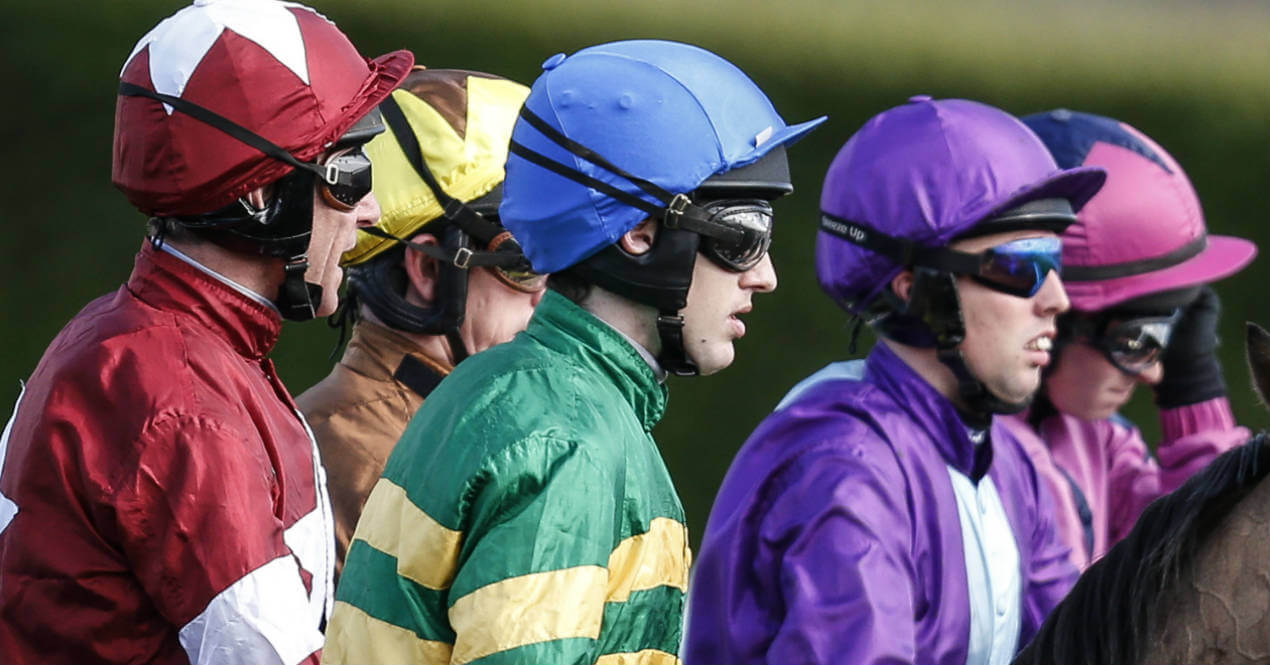 Silks - The jacket and cap (identifying colours) worn by the jockey.

Sire - Male parent of a horse.

Slaughter - A bad ride by a jockey that is considered the major reason for a horse’s defeat.

Slow - A track that is still wet and/or muddy from rain.

Spell - Period of rest (minimum 60-days) and recuperation for a horse after a campaign of racing.

Sprinter - Horse with plenty of speed that prefers racing over shorter distances (typically 1000m-1400m in Australia).

Stallion - A male horse for breeding. 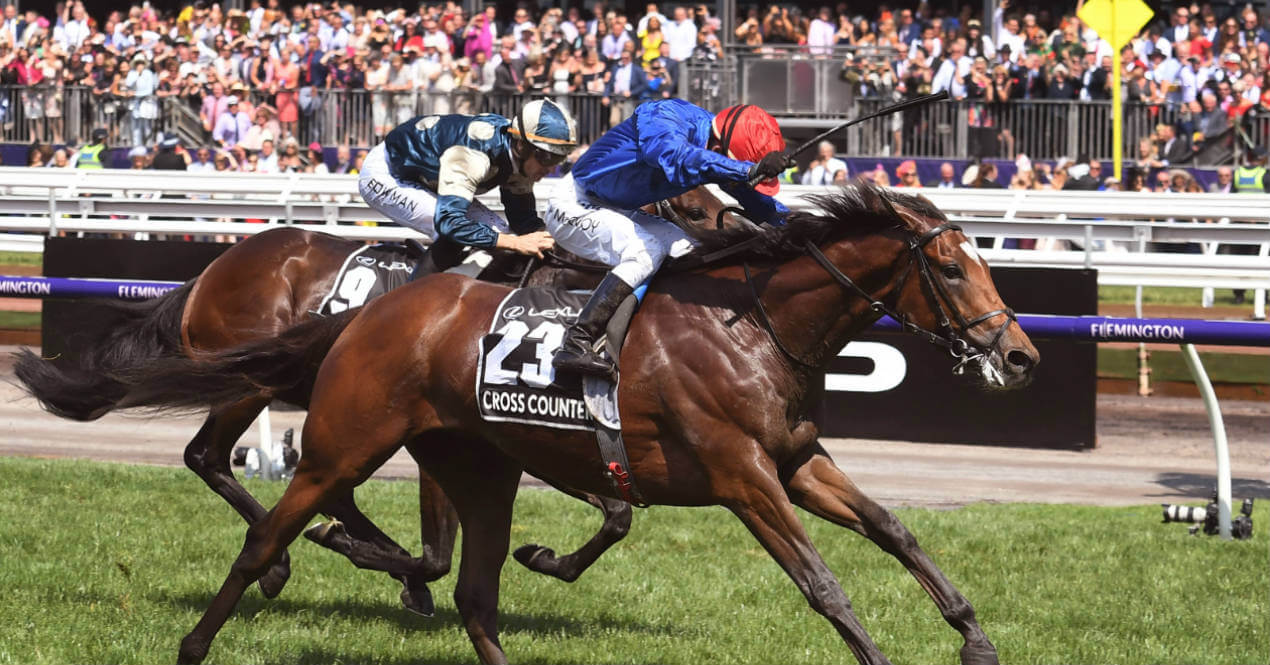 Stayer - Horse with stamina that prefers racing over longer distances (typically 2000m-3200m or more in Australia).

Stewards - Racing officials responsible for enforcing the rules of racing.

Stone Motherless - Describes a horse that finishes a distant last. It can also be said to have ‘tailed off’.

Top Fluc - A bet accepting the odds which are the highest fluctuation in the betting ring.

Track Condition - The rating given to the racing surface. In Australia, these range from 1-10 with surfaces described as one of ‘Firm, Good, Soft or Heavy’ eg. a Heavy 9. Also known as the ‘going’, the track rating can change (be ‘upgraded’ or ‘downgraded’) during the course of a meeting.

Trifecta - A bet selecting the first 3 runners of a race.

Under Double Wraps - Describes a horse that wins without being extended to its fullest effort.

Untried - Describes a horse that has not raced in certain conditions - such as over a longer distance or an a heavy track. 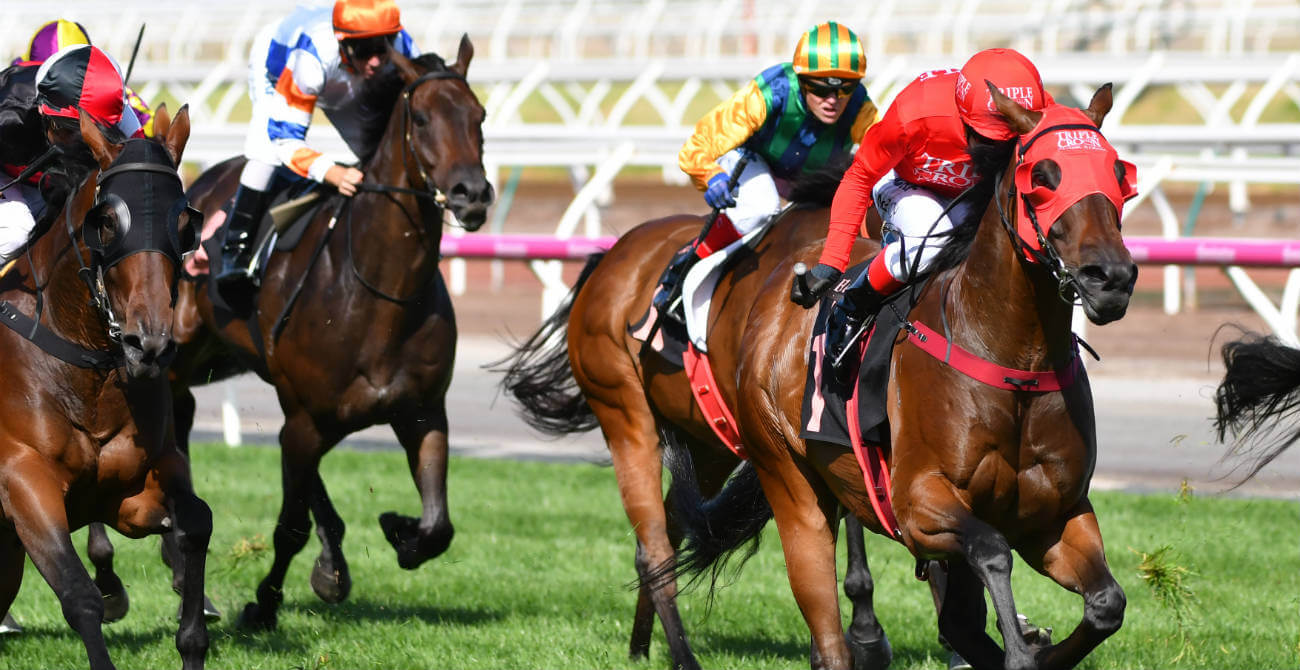 Weight For Age - Fixed scale of weights to be carried by horses.

Write Your Own Ticket - Said about a horse given no chance of winning ie. that the bookmaker would be prepared to offer whatever odds you want given his confidence in the horse’s limitations.

Yearling - A young 2YO horse.

You Can’t Eat Overs - Lament of the punter who has secured good odds about a well-supported horse only to see it lose. So now you have the lowdown on all of the lingo, why not open an account with Unibet today.